The Mock Editor is accessed from the navigation pane and lists any virtual mocks that are available to the proxy instances: 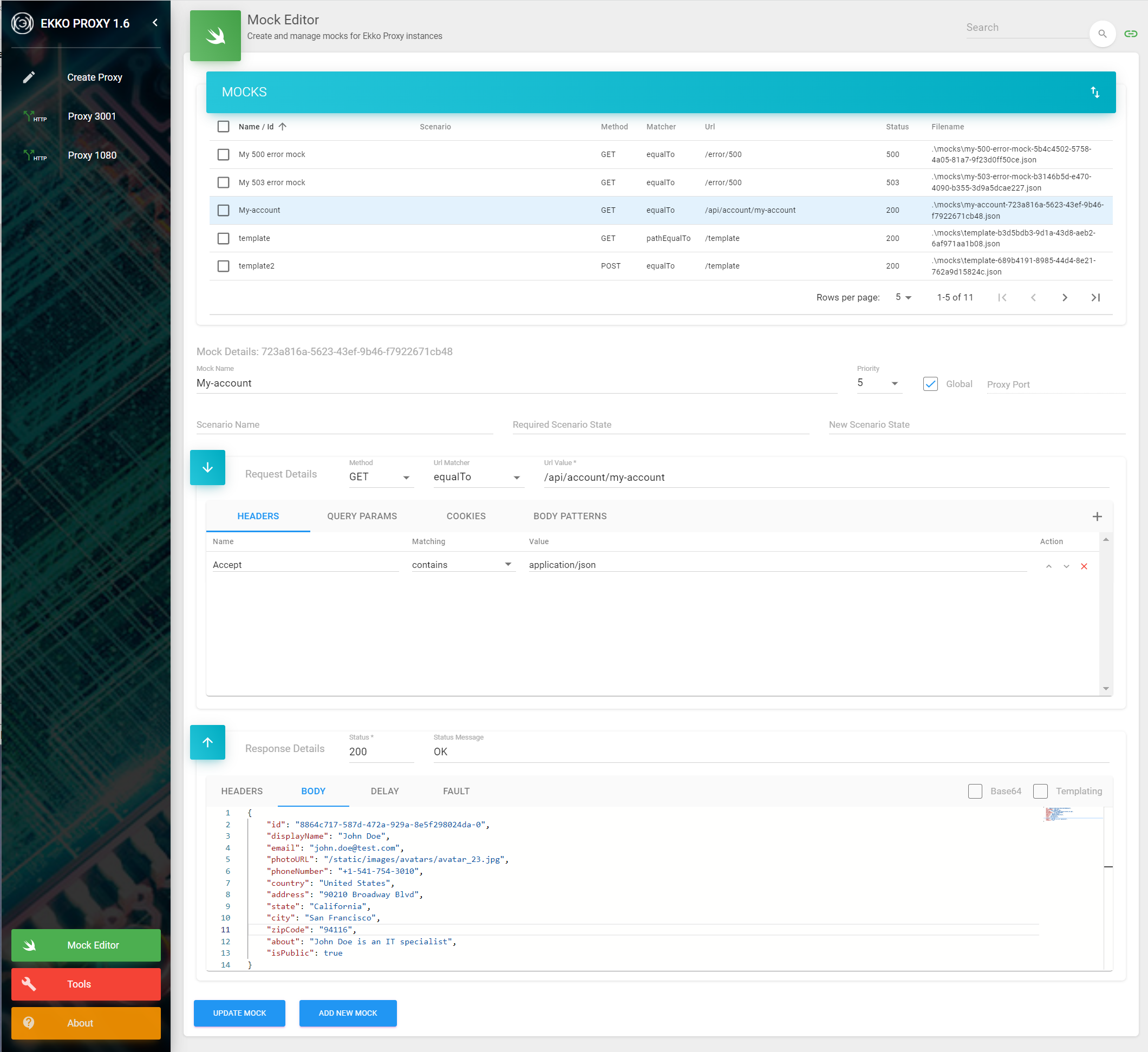 Available WireMocks will appear in the table as shown above and are stored in a mocks folder (relative to the application).

The fields and functions of this part of the WireMock management view are as follows:


Note multiple messages can be selected by clicking the check box or by holding down the Ctrl key while clicking on a mock row.

Mock details of a mock (either selected from the mocks table or directly entered) are displayed in the mock details section as shown below.

The fields on the mock details section are described below:

The request details section shows the request matching details of a mock:

The fields and functions of this part of the mock management view are:

The response details section shows what the response of the mock will be:

The fields and functions of this part of the mock management view are:


For further information on WireMock please refer to the WireMock documentation.

You can send back different responses by configuring different mocks that matches on different request properties. This works well in simple scenarios but can get a bit cumbersome depending on the number of different responses required. For these use cases you can take advantage of the templating option instead which allows you to define handlebars type expressions to output dynamic values based on the request. These expressions can be used in the response headers as well as the response body. For more information on handlebars see handlebars guide.

The table below shows the request object properties that are available for templating.

Dynamic expressions using Handlebars are denoted using double curly brackets e.g. {{request.path}} would output the request path. There are also a number of HTTP elements like query parameters, form fields and headers that can be single or multiple valued. The template request model and built-in helpers attempt to make this easy to work with by wrapping these in a list or single type that returns the first (and often the only) value when no index is specified, but there is also support index access. For instance, given a request URL like /multi-query?myparams=1&myparams=2&myparams=3 then you can extract the query data in the following ways:

Note when using the Handlebars eq helper with single or multiple valued elements, it is necessary to use the indexed form, even if only one value is present. The reason for this is that the non-indexed form returns the wrapper type and not a String type, and will therefore fail to compare with another String value.

In Handlebars there are special characters that have special meaning and therefore can't be used in key names when referencing values. If you need to access keys containing these characters you can use the lookup helper, which permits you to pass the key name instead as a string literal and thus avoid the restriction. One common example of this issue is with array-style query parameters, so for instance if your request URLs that you're matching are of the form /myapi?ids[]=111&ids[]=222&ids[]=333 then you can access these values like:

In addition to the standard helpers and template functions provided by the Java Handlebars implementation by jknack (see guide), EkkoProxy supports a number of convenience helpers for simulating delays and faults, working with JSON or XML request bodies, date/time etc. as described in the following sections.

These examples are relatively simple in order to explain the state machine concept, but once understood, does allow you to create some very realistic and complex scenarios.

To simulate calls over a network to an API, which can be delayed for many reasons like network congestion or excessive server load, EkkoProxy supports setting different types of delays on a per mock basis. Applications need to be resilient to these types of delays and they must be designed to cope with this inevitable variability, and tested to ensure they behave as expected when conditions aren't optimal.

You can use the settings detailed below to set a mock delay or if you need more control on when one or more delays should trigger then you can use the delay helper instead which gives you full programmatic control. See the Handlebars Helpers section for more details.

The below screenshot shows an example of a log-normal distributed delay.

The settings above would produce delays ranging in time (ms) as per below graph with a mean of 2166ms and mode of 1704ms.

The different delays are described below.

Note, any delays set in the response body using the handlebars delay helper will execute before a delay set here.

In the real world APIs communicate over networks which can fail in ways that can destabilise your application. These scenarios can be hard to test with an actual web service, which is why it is beneficial to use web service mocks when testing to inject this faulty behaviour that is otherwise difficult to get the real service to produce on demand. With EkkoProxy you can set various fault types and specify how often they should occur.

You can use the settings detailed below to set a mock fault or if you need more control on when various faults should trigger then you can use the fault helper instead which gives you full programmatic control. See the Handlebars Helpers section for more details.

The below screenshot shows an example of returning the response of another mock with a 503 HTTP status code and a 50% chance of this occurring at the time the mock is invoked.

The following fault types can be selected:


For the faults types listed above you can define a frequency for how often you want the fault to occur. The frequencies are:

Note, any faults set in the response body using the handlebars fault helper will execute before a fault set here.

JDBC ResultSet objects can be mocked with JSON responses by adding a mock for the particular JDBC request URL / command path. The command path is comprised of the JDBC object name followed by the method called on it e.g. /PreparedStatement/executeQuery. To setup a mock for this command path the proxy's mock path needs to be prefixed to it e.g. /sqlrequest/PreparedStatement/executeQuery assuming the mock path was /sqlrequest when you created the proxy. The JDBC commands are treated as HTTP POST requests with the SQL query as the request body and any SQL parameters as headers. The headers will have the SQL parameter index as key and the parameter value as the header value. This means you can setup mocks with different Body Patterns and/or Header matchers to respond with different results depending on the SQL query itself. The below screenshot shows a mock for the same. 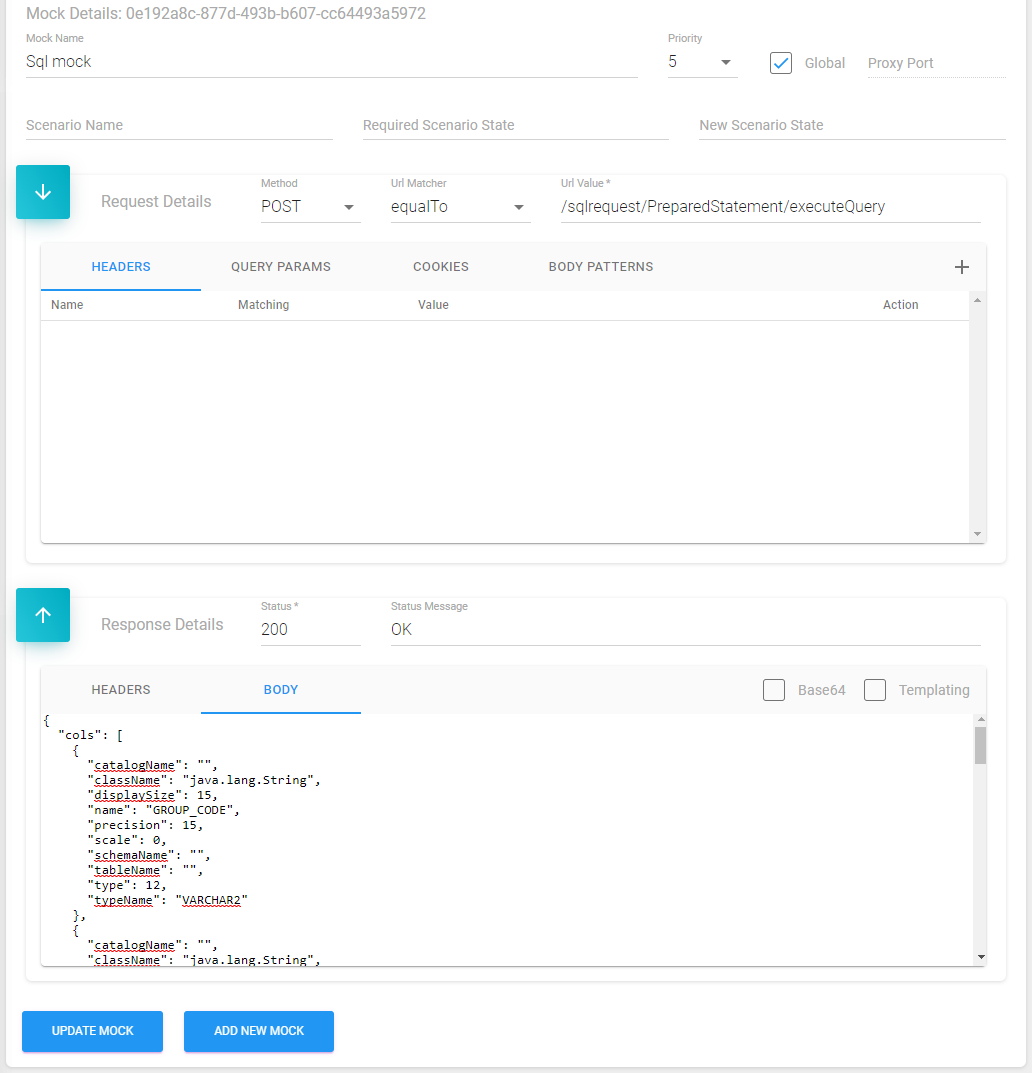 To mock a ResultSet response you have to provide the response in JSON format following the below schema.

The below shows a ResultSet JSON example response in full.